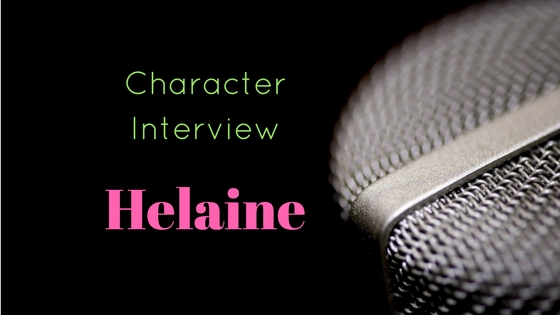 Time for another character interview! I love these because it gives me a chance to dig a little deeper with the characters, and share some tidbits that you won’t find in the books.

If you haven’t read the interview I did with Nadja right before the events of Inharmonic, check out her interview.

Today I get to chat with Helaine. I caught up with her shortly after she awoke from her long sleep in the infirmary. Here’s what she had to say:

A.K.R.: Helaine Vastrof is an apprentice at the Music Conservatory as well as one if its most accomplished violinists—

A.K.R.: She has also received a lot of attention lately for something about as far from music as you can get. Helaine has just awoken from a three-day sleep which has the local medical community baffled. Thank you for taking the time to chat with me today, Helaine. I wish it could be under better circumstance.

Helaine: Yes. I keep telling everyone that I’m fine, but no one seems to believe me. I mean, I know everyone is frustrated that we can’t find a cause, but right now I just want to settle back into my own room. I’m awake. I feel wonderful, and there don’t seem to be any lasting effects.

A.K.R.: Good! Well, in that case, let’s get right to the interview.

A.K.R.:  To start off, can you tell us a little about your background? Family, siblings, that sort of thing.

Helaine: Well, I’m originally from the Gelid Highlands. My father works in one of the copper mines there. He’s a Master Musician, you know.

Helaine: You could say that.

A.K.R.: What about your siblings, are they musicians, too?

Helaine: Oh, no. I don’t have any brothers or sisters, though I always wished I did. I mean, between my father and Na Na, I was never lonely. But it would have been nice to have someone closer to my own age. Sort of a built-in best friend.

Helaine: My grandmother. My father’s mother. My mother is . . .

Helaine: Anyway, with father and Na Na, our home has always felt full.

A.K.R.: So you had a happy childhood?

A.K.R.: Was there ever a time you wanted to be something other than a musician?

Helaine: No. Ever since my parents gave me my first violin when I was three, it has been the only thing I’ve ever wanted to do.

A.K.R.: That’s incredible, to know from such a young age. Other than music, do you have any special skills?

Helaine: …I assume you’re talking about my extra sense.

A.K.R.: *sheepish grin* Okay. I didn’t want to ask outright in case you were uncomfortable talking about it.

Helaine: No, no, that’s fine, really. I don’t mind. People are always curious anyway, and I’m happy to talk to anyone who’s genuinely interested. To put it simply, I can smell sound. All sound, but music more specifically. It comes through a lot stronger.

A.K.R.: Do you know how you got this ability?

Helaine: I seem to have inherited it. My mother doesn’t have anything like it, but her mother could see music.

A.K.R.: Wow, that’s amazing. What kinds of things can you do with a talent like that?

Helaine: Not a single thing. It’s really more of a bother than anything else. Every sound has a different smell, and not all smells are pleasant when mixed together. It’s not all perfume and roses. And some of them are just plain awful. Trombones, for example. *shudders* You don’t want to know what those smell like.

A.K.R.: But with all those smells, there must be some good ones. Do you have any favorites?

Helaine: Hmmm. I really like my violin. It smells like the rain. And the trowhorn is nice, too. It reminds me of my Na Na.

A.K.R.: Ooo, I love the trowhorn! Such a nice mellow sound.

Helaine: It really is lovely.

A.K.R.: Okay, let’s change directions for a moment because I want to really dig into who Helaine Vastroff is. Time for a deeply probing psychological questions. *mischievous eyebrow wiggle*

Helaine: Um, that sounds uncomfortable, to say the least. I hope it’s not anything too personal. I mean—

A.K.R.: If you were in a shop right now, what are five things I might find in your basket?

Helaine: *laughs* Well, that would all depend. What kind of shop?

A.K.R.: Let’s pretend it’s an Anything shop – a magical general store of sorts.

Helaine: In that case, I would probably have a new outfit or two and a new chin rest – mine is getting worn out. There’s a pastel of the Music Conservatory by an artist in the market that I’ve been eyeing, so probably that. Um, a copy of “Cloaked Dragon” for Petrin. He’s been dying to read that. And… oh, I know! A big, icy cup of frozen sweet cream with walnuts and some caramel on top. I know it’s the middle of summer, but you said it was a magical general store. And I’ve been craving that since the last snow melted.

Helaine: It’s the most delicious thing I’ve ever put in my mouth.

A.K.R.: You mentioned Petrin. Can you tell us a little about him?

A.K.R.: He was kind of hovering around over here before we started the interview. Has be been keeping you company while you’ve been staying here?

Helaine: He’s been doing everything; making sure I’m comfortable, helping me prepare for our upcoming exams. I’ve missed a lot of classes, you know. He’s even been bringing in my meals for the past two days, since Timothy left without notice. I hear they’ve hired someone to fill Timothy’s spot, though, so hopefully Petrin can stop worrying about the food. It’s just nice having him here with me, especially since he’s the only friend visiting at the moment…

Helaine: Yes, he is. *smiles shyly*

A.K.R.: Well, we’re getting close to the end of this interview, and I like to finish it off with a few rapid-fire questions. Are you ready?

Helaine: Besides the frozen sweet cream?

A.K.R.: Is there anything else?

Helaine: Really? Do I have to pick just one? Because, there is so much good music. I love anything that speaks to the heart. I love my violin, but I love to sing too. I love the way good music wraps you in a hug and squeezes like an old friend you haven’t seen in a while. It can lift your spirit and carry it high above everything else.

Oh, and it can do some pretty neat other things, too. Um, wait. Did I answer the question?

Helaine: My violin, a portrait of my father, tons of books and music, and too many clothes.

A.K.R.: And finally, how do you feel about being the main character in Perception?

Helaine: Nervous. Are you going to talk about more than my extra sense? Because that seems to be what people like to focus on.

A.K.R.: No, not only that. But I’m sure it will come into the story somewhere, since it is a part of who you are.

Helaine: All right. As long as that’s not the only thing. I just hope people will see me for me.

A.K.R.: No, thank you for taking the time to talk with me! And I hope you get released from the infirmary soon. At least you’re not alone. I see Petrin making his way back over here.

A.K.R.: And for the Readers, be on the look out for the release of Perception on August 23, 2017, exclusively on Amazon.