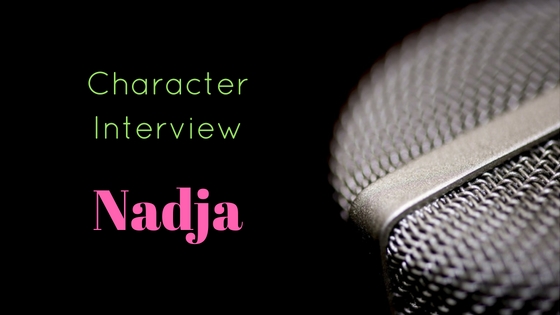 Launch day for Inharmonic is only one month away! As we continue to get closer to launch, I’ll be sharing more teasers and reveals here on the blog.

Today, I want to introduce you to the story’s main character. Nadja was kind enough to join me for an interview just days before I recorded the events of Chapter One.

A.K.R.: Nadja Filamen is a member of the Wanderer tribe and an expert in all things aquatic. She is joining us today from the cozy two-person tent she shares with her mother currently situated on a flat plain somewhere in the western part of the Seven Steppes. But, rumor has it, she won’t be living here much longer. Nadja, thank you so much for taking the time to chat with me today!

A.K.R.: Since this isn’t a video chat, let’s start out by letting the Readers know what you look like.

Nadja: Oh, you want me to describe myself?

Nadja: *shifting nervously* Oh. All right, um… well, I’m on the short side with black hair and green eyes… Is that enough?

A.K.R.: Whatever you feel comfortable sharing is just fine.

Now we’ve got an idea about what you look like, tell us some more about this set-up. I noticed, probably, a hundred other tents similar to this one when I was walking across camp to get here.

Nadja: Correct. The tents are easy to assemble and disassemble, which is a necessity when you live a nomadic life. They’re all basically the same, but each family decorates the interior to their own tastes.

A.K.R.: And just for clarification, when you say “nomadic life,” you mean you’re never settled in one place for very long. Always on the move.

Nadja: That’s right. The amount of time we spend in any place depends on the weather and time of year, but we’re never in one place for more than a month or so.

A.K.R.: Wow. *looks around tent* I can’t imagine trying to carry all of this around all the time.

Nadja: We do have animals that help share the burden, but you might surprised at what a small load all this actually makes. For instance, that chair you’re sitting on folds down to about the size of a loaf of bread.

Nadja: Just about everything we use is made to be lightweight and portable.

A.K.R.: This whole lifestyle is so different from what I’m used to. What was it like growing up in the tribe?

Nadja: For me, it’s just normal. It was always nice to have a big group of playmates around all the time. I was never lonely as a child. And everyone knows everyone else – which can be a good and a bad thing.

A.K.R.: I grew up in a small town, so I totally get your meaning. What about your family? Do you have any siblings?

Nadja: No, it’s just me and my mother. My father died before my first birthday, so I never really knew him. My grandfather speaks for us, but really, he just goes along with my mother, so it’s kind of nice.

Nadja: Women don’t have an official voice within the tribe. Only the male head of the family can do things like have a say in big tribal issues and represent the family to the Elders.

A.K.R.: Does that ever cause any conflict in your home? Do you get along well with your grandfather?

Nadja: Oh, yes… No?… I mean no to the first part and yes to the second.

Like I said, he lets my mother make the decisions, and then he represents them for us. I suppose it’s a different arrangement than in most other Wanderer families, but it works for us.

A.K.R.: Your mother must be a strong woman.

Nadja: The strongest I know. Life might have been easier for her if she had remarried after my father died, but I think she enjoys her bit of independence, such as it is. She’s capable and wise, and, honestly, I can’t think of any other Speaker who takes care of the needs of his family better than my mother has. If I grow into half the woman she is, I’ll be happy.

A.K.R.: She sounds amazing. Do you think I’ll be able to meet her while I’m here?

Nadja: Um, I think she’s out gathering sorrel with my aunt right now, but if she makes it back in time, I’m sure she’d be happy to meet you.

A.K.R.: Wonderful. So, you said she’s out gathering now. I understand that, within the tribe, a woman’s occupation is determined by her husband. Correct?

A.K.R.: And your father was a weaver. So, why is she with your aunt instead of helping the other weavers?

Nadja: *laughs* Yes, that’s a good question. All right. Let me see if I can explain this so it doesn’t sound confusing.

A woman works in her family’s trade. My mother was a Marimen before she married my father, so she grew up working in the rivers and oceans, fishing, diving for shellfish, that sort of thing. When she married, she began learning my father’s trade: weaving. When he died, and my grandfather resumed the role of Speaker for us, she was given some freedom to choose where to devote her talents. Since she had only been with my father a short time, her weaving skills are…

Nadja: That’s a nice way of putting it.

A.K.R.: Okay. I understand the fishing and the weaving, but that still doesn’t explain the gathering.

Nadja: I’m not done yet.

My grandfather is getting older, and when he dies the Speaker role will pass to our next closest male relative. Since my grandfather has no sons, my Aunt Pili’s husband, Uncle Harman, will assume that role when the time comes.

A.K.R.: And he’s a gatherer. So your mother is training, so to speak.

Nadja: I know, it sounds a bit convoluted. It’s usually much more straightforward – grow up in one trade, marry and work the rest of your life in another. It should be that simple for me.

A.K.R.: Ahhh. Now you’re getting into something I hinted at in the intro. Would you like to tell the Readers why you’re going to be moving out of this lovely home soon?

A.K.R.: Can you tell us a little about the groom-to-be?

Nadja: Yes. His name is Luca Tulmen, and he’s a hunter. He comes from a very respectable family, and, of course, I’ve known him since I was little. He’s kind and dependable, and will make a good husband. My parents did well when they arranged the match.

A.K.R.: And let me just say, Readers, I met Luca on my way in today, and the man is very easy on the eyes. *fans self*

Nadja: *blushing* Yes. He is a good man.

A.K.R.: Are there any wedding plans you care to share?

Nadja: Our mothers are handling most of the details, so I don’t really have much to tell. Our Betrothal Celebration is coming up in three days, and that will be the start of a two-week series of visits and meals and gatherings that all lead up to the wedding ceremony. I can’t believe it’s almost here already.

A.K.R.: Well I wish you all the happiness in the world, and I hope you and Luca have a wonderful, long life together.

A.K.R.: I want to do a few rapid-fire questions before we wrap up here, and I let you get back to your day. Are you ready?

Nadja: My mother’s honeyed rolls. And cinnamon anything.

Nadja: Traditional folk. There’s something pure about a simple melody. Sometimes it’s easy to lose the essence of a song when there are too many things going on at once.

A.K.R.: *points to trunk at the foot of Nadja’s bed* Name five items I would find in there.

Nadja: My flute. Clothes. Linens. My father’s shuttle. And, my shell collection.

A.K.R.: Lastly, how do you feel about being the main character in Inharmonic?

But, honestly, I’m don’t know how great of a story you’re going to get. My life is pretty average. I mean, I think the next two weeks will be exciting, with the celebration and the wedding, but other than that, I’m afraid you’re going to get bored pretty quickly.

A.K.R.: *grins* Thanks for the warning. But I think you’ve got an interesting story to tell, and I’ll do my best to find it.

Nadja: If you say so.

A.K.R.: Well, Nadja, thanks again for taking time out of your day to talk with me. I hope we can do this again soon. Maybe sometime after the book releases?

Nadja: I don’t see why not.

A.K.R.: And Readers, you can look for Inharmonic to release on January 5, 2017 exclusively on Amazon.