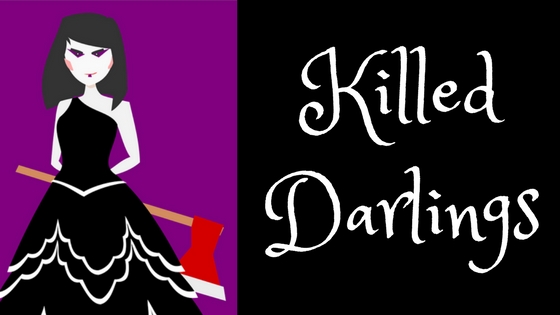 I recently came across the term “killed darlings” on Instagram, where it appeared as the challenge post for #AuthorLifeMonth on February 9. I took it to mean “characters whom we’ve killed in our writing,” and promptly posted a quote from Inharmonic regarding a character whose demise is the catalyst for the entire story.

Within a few hours, I discovered what the challenge was really about.

The origin of “murder your darlings/kill your darlings” is debated across the internet, but (most likely) came from a 1914 lecture given at Cambridge University by English writer Arthur Quiller-Couch. The exact meaning of the phrase is also debated, but (most likely) refers to those bits of writing which are beloved by the writer but unnecessary to the story. The useless side characters. The deeply purple prose. The fluff.

Time for a do-over.

Here’s a proper Killed Darling – a deleted scene from Inharmonic, which was cut early on in the editing process. In fact, I don’t think it even made it out to my beta readers.

In this scene, we find Nadja unconscious for *SPOILER-Y* reasons. It was the original opening for Chapter 3; then it became the opening of Chapter 1; then it was cut, lest I fall into the cliche of opening a novel with the main character in a dream(that’s-not-technically-a-dream). 🙂

The air was cool and peaceful.  Nadja’s body felt weightless and free as she bobbed along in the black stillness.

Had it all just been some terrible nightmare?

She basked in the calm tranquility.  No pain.  No worry.

Her name floated towards her, melodic, yet faint and muffled as if it was encased in a large bubble.  Annoyed at the interruption, she turned her attention back to the serenity of the nothingness.

Another bubble.  This one was a little louder and had a sense of urgency about it.  She wanted to reach out and pop it, but couldn’t seem to move her arms.  Or her legs, for that matter.  Or anything at all.

Off in the distance a pinpoint of light appeared, a tiny speck in the void.  Nadja watched it, curiously.  As she watched, the trespassing speck begin to grow larger, slowly at first, but increasing in speed the larger it became.  Quickly she became aware that it wasn’t merely getting larger, it was coming towards her.  Her heart began to beat wildly in her chest as she realized that she was directly in its path.  Frantically, she tried to move her body out of the way, willing her arms and legs to do something, anything, to avoid a collision, but they stayed frozen in place.  Fear gripped her, and she felt like someone had coiled a long rope around her chest and was pulling it tighter and tighter. The light was almost upon her, and the air in the void began to warm at an alarming rate, causing the entire surface of her body to break out in a drenching sweat.  Her head started to pound.  The stench of flesh and burning wood flooded her nostrils, and a single tear slid down her cheek as the light rushed in to overtake her.